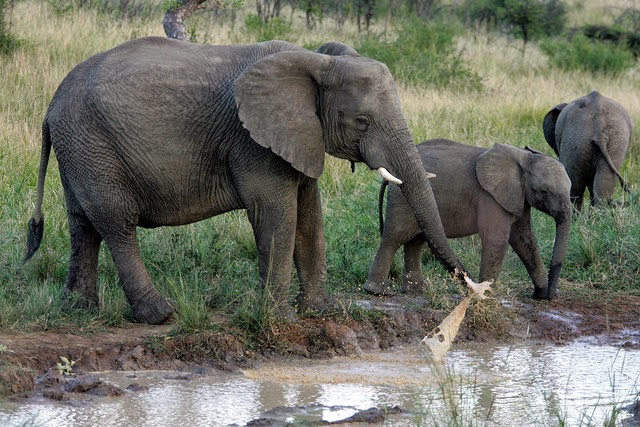 Elephants at a water hole in Hluhluwe-Imfolozi game reserve, in KwaZulu-Natal, South Africa. The about 600 elephants in Hluhluwe-iMfolozi come from a population of 160 that were introduced between 1985 and 1991 when they were moved from the Kruger National Park, which was considered over populated with elephants, according to the park’s website. Photographer: Alexander Joe/AFP via Getty Images

Elephants at Hluhluwe-iMfolozi Park, South Africa’s oldest game reserve, have begun receiving a contraceptive vaccine to control the pachyderm population.
The game reserve is the largest in the program, which now includes 20 parks, according to the statement by the Humane Society International, an animal conservation organization.


“The immunocontraceptive program allows elephant populations to be managed humanely, especially in small enclosed parks and private conservancies,” said the group, along with Ezemvelo, the conservation authority in KwaZulu-Natal, the province where the park is located.
While elephants are endangered across much of Africa, in Southern Africa many parks are overpopulated, leading to damage to ecosystems as the animals, which can weigh six metric tons and stand 3.3 meters (10 feet) at the shoulder, tear down trees.
In the past, including in South Africa, they have been culled, leading to protests from animal rights organizations. Moving the animals from one area to another is usually considered too expensive to be viable as a conservation method.

The about 600 elephants in Hluhluwe-iMfolozi come from a population of 160 that were introduced between 1985 and 1991 when they were moved from the Kruger National Park, which was considered over populated with elephants, according to the park’s website.
Slowing the growth of the elephant population is converse to the problem South Africa faces over a threatened rhino herd.

At least 769 rhinos have been poached this year in the nation, with two-thirds of those being killed in the Kruger park, compared with a record 1,004 of the animals slaughtered in all of last year.
The vaccine, injected remotely into African elephant cows by dart gun, is a non-hormonal treatment, the groups said. “It is also reversible, allowing managers to fine-tune population growth.”
Africa has between 470,000 and 690,000 elephants, according to the WWF. Of those 300,000 live in southern Africa.

To contact the reporter on this story: Paul Burkhardt in Johannesburg at pburkhardt@bloomberg.net